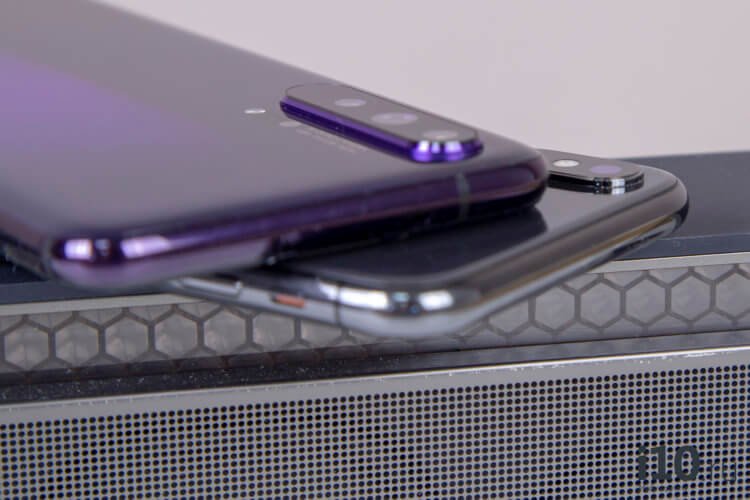 Many do not like the bullet camera in a smartphone. This is really the scourge of the modern device of this gadget. It was good when the smartphone could lie flat on the table and did not sway from touching, like a minibus passenger on turns. Apparently, those days are gone, and they can only be remembered. Or not? Let’s figure out why smartphone cameras stick out .

First of all, it is worth deciding on the basic concepts. In this article we will talk about the diagonal of the matrix, the focal length and resolution of the image. Having understood these concepts, we will understand why the camera of a modern smartphone should stick out. She may not bulge, but you yourself do not want to.

The first camera on the phone

The first phone that was equipped with a camera was a device released 20 years ago. It was in October 1999. The Kyocera phone was designated VP-210. The camera had a resolution of only 0.1 megapixels (that’s about 370 pixels on the wide side with a 4: 3 ratio). A year later, at the end of 2000, the Sharp J-SH04 model, also equipped with a photo module, entered the Japanese market. Further development went at a faster pace.

At one time, in one of the thematic publications, I came across an article in which the author called a mobile photo a mutated descendant of an emoticon. Then it was really so, but now everything has changed.

How is the smartphone camera arranged?

I have already described in detail how the smartphone’s camera works , but I will briefly dwell on the main points again.

Speaking simplistically, and this is what we need, in order to understand what we are discussing today, the camera consists of the following elements:

There are also moving elements, a processor , many substrates and technical layers, but the main elements are listed above, so let’s dwell on them in more detail.

It is not difficult to understand what exactly the matrix is ​​responsible for so that we get a ready-made picture. In modern smartphones, its size is only a few millimeters.

For example, the Sony IMX586 sensor, very popular today, has a resolution of 48 megapixels and a physical diagonal of 8 mm (1/2 inch). The physical size of each pixel in this matrix is ​​0.8 μm. This is so small, it is impossible to reduce the matrix further. Even with this size, it’s very difficult for a pixel to get a normal amount of light. All this leads to noise in the finished image.

That is why, matrices with a physical size of less than 1/3 of an inch are almost never produced. If they occur, then the resolution of such matrices will be very low. Not everyone is ready to put up with this. Moreover, the camera resolution has become for the buyer the main criterion for choosing a smartphone. Marketers are actively cultivating this opinion in the minds of the population and are constantly trying to show that they have the most “clear” camera. The announcement of the matrix with a resolution of more than 100 megapixels , about which we recently wrote, is another confirmation of this.

How does the camera work?

Here it’s worth a little distraction and draw a parallel with large SLR cameras. The classic film size, which has become the standard for full-frame matrices, is 35 mm. This figure characterizes the width, and the diagonal is approximately 42 mm. Through simple calculations, we can understand that the difference between the matrices of a full-fledged camera and a smartphone (8 mm) is 5.25-fold.

In this case, the focal length for a full-frame camera is approximately 28 mm. Without complicated calculations, we mentally reduce the design and get the focal length for the smartphone equal to 5.3 mm. Moreover, this is not about the distance to the end of the lens, but about the distance from the matrix to the point of convergence of the rays. That is, to the lens that is closest to the matrix.

In addition, do not forget about the need to place focusing lenses in the module and the general design of the lens. This will require another 2-3 mm. Plus protective glass – a few more millimeters. As a result, we get a “sandwich”, which occupies at least 8 mm in the smartphone case.

How to install a camera in a smartphone

When Apple released the iPhone 6 with a bulging camera, many were very indignant and said that it was not worth it. This event became a trigger that launched a chain reaction, and all manufacturers began to use bullet cameras in their flagships. Some at first resisted, but then also broke under the onslaught of modern trends.

That’s just these trends were not design, as many thought and still seems to be. In conditions of strong competition in the market, manufacturers should produce cameras no worse than competitors. Since the laws of physics are the only ones that cannot be violated, they have to make certain technical compromises.

There is a way out anyway. The first of these is the use of a thicker case. In this case, we even get an advantage in the form of a larger battery , but this is somehow not the flagship.

The second output will be the installation of a smaller sensor. But, if the diagonal decreases, you will have to decrease the resolution. Not all manufacturers are ready for this. Of course, one of you will say that the iPhone or Sony Xperia 1 resolution is small, but the camera sticks out anyway. Here another moment is already turning on.

How to improve the quality of the camera?

Above was an example with a camera thickness of 8 mm. These were the minimum values ​​for the module. At the same time, no one bothers the manufacturer, while maintaining the diagonal of the matrix and the size of the sensor, to change the physical size of the pixel. Reduce their number and increase size. This will greatly affect the quality of the picture for the better.

You can reduce the number of pixels by saving their size. This will decrease the sensor. The minimum focal length will also decrease, but while maintaining the thickness of the module, the manufacturer will be able to use more optical elements, which will also be able to improve the quality of the picture or focus.

Can a smartphone replace a DSLR?

From the above examples, it becomes clear that the bulging camera is not a whim of the manufacturer, but a real necessity. We all demand improvements in image quality, but forget about physics.

Returning to the upcoming sensor with a resolution of more than 100 megapixels , we can conclude that the camera will stick out even more. After all, it has already been stated that an increase in the number of pixels is achieved due to the physical increase in the matrix.

As a bonus from the above calculations, we understand why a full ZOOM lens cannot be installed in a smartphone. Even for the possibility of a small increase, the module should become at least twice as large. That’s all physics.