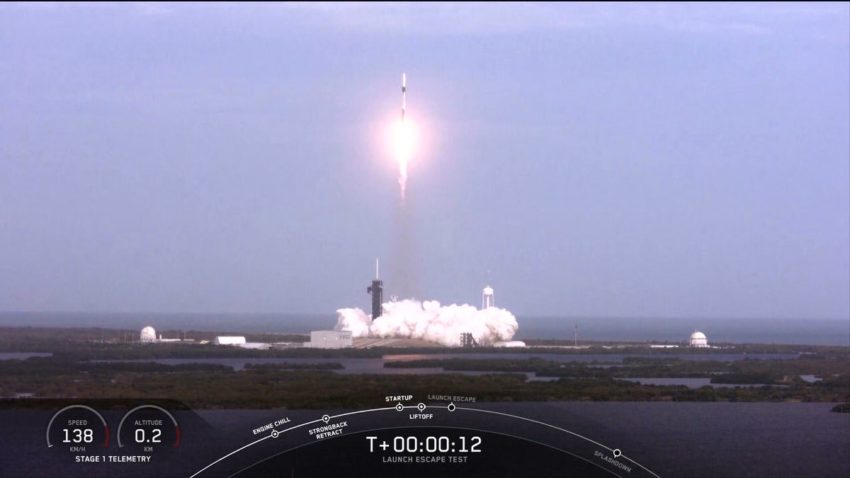 SpaceX, the founder and leader of which is American businessman Ilon Mask, conducted the final test of the Crew Dragon capsule from the Falcon 9 booster. The next step is to send the capsule to the International Comic Station along with NASA astronauts on board. This time, there were two mannequins in the capsule.

Interestingly, as part of the test, several minutes after takeoff, the Falcon 9 was deliberately blown up . Thus, SpaceX intends to demonstrate the ability to overcome emergency situations, that is, to test the system for emergency disconnection of the capsule from the rocket in flight.

Watch the Falcon 9 rocket explosion video over the Atlantic Ocean

At the same time, this test was to demonstrate the effectiveness of the backup plan that the company had to develop in the event of an accident. In particular, if one of the rockets began to collapse during take-off, NASA wanted to make sure that, despite the malfunction, the astronauts would return home alive.

Prior to this, the Crew Dragon ship was automatically undocked using eight SuperDraco engines. Then the ship with the help of parachutes successfully returned to Earth and landed in the Atlantic Ocean 32 kilometers from the coast of Florida, where rescuers were already waiting for Crew Dragon.

The launch of the Crew Dragon capsule on the Falcon 9 rocket took place from the Kennedy Space Center in Florida. The event could be watched live on the SpaceX YouTube channel and NASA website.

Emergency flight interruption testing is one of the final steps in preparing SpaceX for the Commercial Crew program. This government initiative is aimed at the development of the American space industry as a whole. It should also allow to refuse the services of Roscosmos for sending astronauts to the ISS . Over the past six years, SpaceX has been developing the Crew Dragon capsule for this purpose.

We add that SpaceX has already tested Crew Dragon alarm systems before, but not in the air. So, in November, the company successfully completed ground firing tests of the capsule evacuation system engines.

Although only 19 days passed in 2020, SpaceX has already launched rockets. The first such launch took place on January 7, when the Falcon 9 launched 60 Starlink Internet satellites into orbit The first launch in the new decade: SpaceX has sent into space a batch of satellites for the Internet . In total, their weight is about 15,400 kilograms.