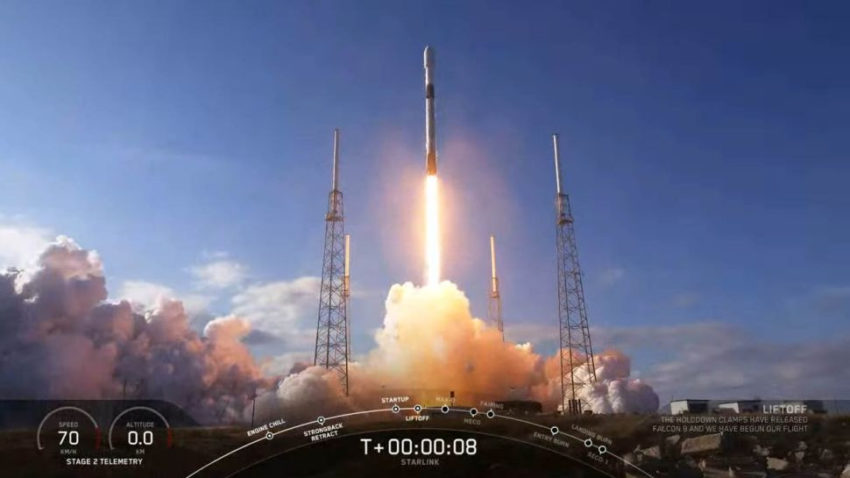 The sooty Falcon 9 rocket took off at 17:06 Moscow time (9:06 Eastern time), making its third flight. She took off from Space Launch Complex 40 at the Air Force station at Cape Canaveral in Florida. The rocket carried 60 Starlink satellites for the growing constellation SpaceX, the company’s second launch this month. All satellites were successfully deployed about an hour after launch.

Last week, a strong wind forced a private space company to delay the launch of the Starlink-3 mission. SpaceX then set its sights on the date of January 28th, but the stormy ocean where platforms were awaited could thwart any landing attempt.

The star of this mission, the first stage of the Falcon 9, which SpaceX called B1051.3, previously lifted the Crew Dragon capsule into orbit as part of the mission to send people to the space station (Demo-1), as well as a trio of Earth observing satellites for Canada.

After a successful launch, the first stage of the rocket gently landed on the SpaceX platform platform “Of Course I Still Love You” in the Atlantic Ocean, marking the 49th return of the company’s rocket.

SpaceX designed the boosted Falcon 9 rocket so that it could fly as many as 10 times with minor repairs between takeoffs. The company has not yet launched a booster rocket five times, but continues to build up veterans of three or four flights, proving their capabilities.

Today’s launch is part of SpaceX’s goal of integrating the globe with the Starlink network. Each satellite is identical, weighs approximately 485 pounds (220 kg), and is part of a larger network, the purpose of which is to provide access to the Internet around the planet. With this launch, she increased the constellation SpaceX to 240 pieces, making it the largest in orbit to date.