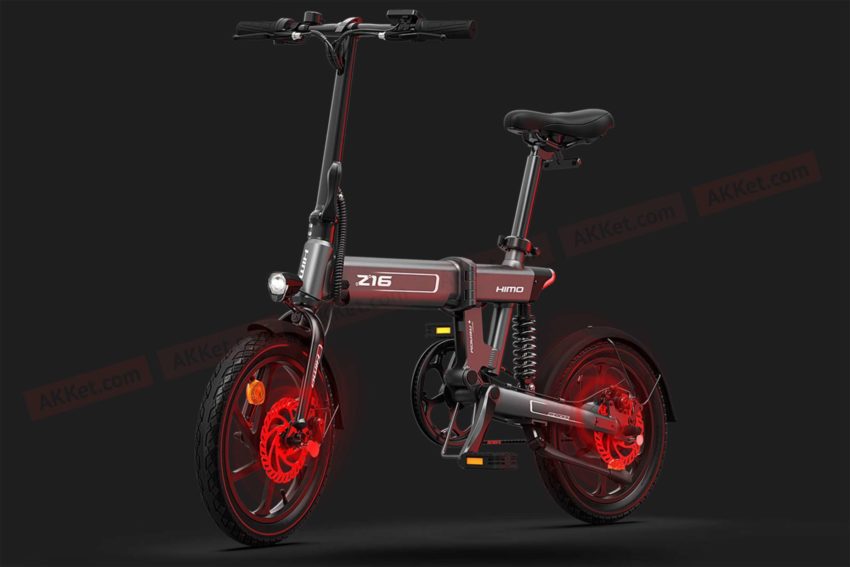 Following the fact that Xiaomi officially introduced and launched the sale of the new Xiaomi Mijia Scooter 1S electric scooter in China, this electronics manufacturer decided to please all people with another novelty, which turned out to be an electric bike called Himo Z16. The novelty has become an improved version of the Himo C16 model, which was released back in 2019. The new model features an improved power reserve and a more sophisticated design. One of the main advantages of the new bike is that it has a compact size, and due to its folding design, it is very easy to transport it even in small cars and by taxi. When folded, it only takes up 860 x 650 x 200 mm of space.

The manufacturing company positions the novelty as a full-fledged means of moving around the city, and also, as a means of recreation, because it can be used to comfortably ride through parks, country roads, and other places. The novelty boasts a 250W electric motor that delivers 500W at its peak. This is enough for the bike to accelerate to 25 kilometers per hour. Such speed will allow you to quickly get from one place to another, especially since Himo Z16 can travel as much as 80 kilometers on one charge, but this indicator, of course, depends on the driver’s weight, ambient temperature, road slope, road surface material, and together so, of course, on the driving style.

One of the features of this electric bike from Xiaomi is that it can be used in hybrid mode as well as standalone. In the first case, the driver drives on electric traction, but at the same time, with his own feet, he helps the wheels to rotate, which significantly saves energy consumption and allows significantly more to pass. It is in this form, according to the manufacturer, that the Himo Z16 electric bike can travel 80 km, while only from the battery energy it can cover a distance of up to 55 kilometers. Autonomous mode assumes movement without electricity at all, so you can not be afraid to stay with a discharged vehicle somewhere near the end of the route.

The battery is removable, and this was done to store the electric bike, for example, in the garage, while taking the battery with you home to recharge after each trip, especially since it weighs very little – only 2.5 kilograms. It takes 6 hours to fully charge the battery and the charger is included in the package. The total weight of the entire bike, including the battery, is 22.5 kilograms, so it can be easily stored in the trunk or on the balcony of the apartment. To control the Xiaomi Himo Z16, there is a special on-board computer with an IPS screen, and it is protected from water and dust according to the IPX7 standard, which makes it possible to use it during heavy rain. The screen shows the current speed, remaining battery power, mileage, and many other data, allowing you to switch even driving modes (from slow to fast).

There are disc brakes on the rear and front wheels of the bike, so you don’t even have to worry about the safety of movement. The novelty is equipped with a small headlight for moving in the dark, as well as a footboard for easy parking. The novelty is available in black, white, yellow, and white colors, and it was estimated at 2,499 rubles, that is, you can buy such an electric bike for only 27,000 rubles, which is extremely small by modern standards. Official sales of this personal vehicle will begin in China on May 19, 2020, when everyone can buy it. The appearance of new items on sale in the Russian territory should take place in June-June this year, that is, in the near future.