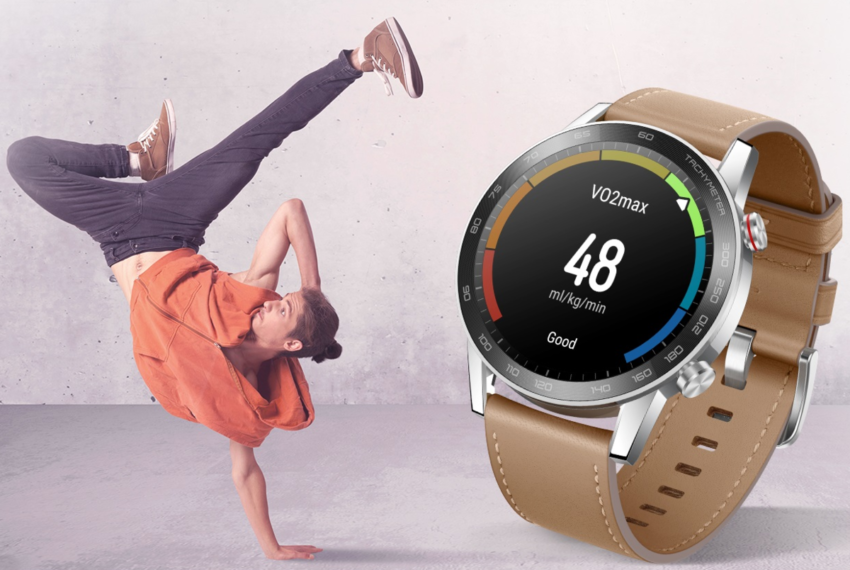 The market for smart watches is not as diverse as smartphones. Yes, and smart watches themselves have not become the same need, as long as they are only pleasant companions for smartphones. Of course, manufacturers and models are enough, but they do not always become popular with end users. If we consider large players, then the first thing we remember is Apple, Samsung and Huawei / Honor. Today we will talk about the second generation of smart watches Honor MagicWatch 2.

As they say, they are met by clothes – and Honor MagicWatch 2 has no problems with this. Even at the unpacking stage, you can see the company’s attitude to details. The box is made of thick cardboard in blue. Opening the top cover, we see the dial of the watch itself and the name printed next to it. In order to get to the charging cable, the charging station itself and the user manual, you need to open several more compartment boxes. Everything looks very neat and stylish.

As for the design of the watch itself, it honestly exceeds all expectations. If you look at the watch on the official images, you can see through the chur brutalistic design, which is mainly associated with accessories for men 50+. And if I chose a watch in an online store without seeing them in reality, then Honor MagicWatch 2 would definitely pass me by. Because in the images their design is too strict, too boring – uninteresting.

However, when I saw the watch in reality, I changed my mind a lot. The device looks much neater than it is represented in official images. They all also have a classic design, but their rigor and brutalism is no longer so striking. In the same way, the strap in life looks much nicer than in the pictures. We have a review on the 46 mm version. There is also a 42 mm version, which lacks a fake bezel. The smaller version in the pictures looks much prettier, it is more elegant. If both versions got the same design as the 42 mm version, it would be much better.

A smart watch or a sophisticated fitness tracker?

The functionality of smart watches is almost the same for all manufacturers. They differ from each other mainly in design and several unique features that vendors installed in them.

But smart watches differ from fitness trackers quite strongly. However, this story is not about Honor MagicWatch 2. The company decided not to reinvent the wheel and not repeat, for example, for Apple. And they decided to do even better what they do so well. As we know, Honor is one of the most popular manufacturers of fitness trackers. And sometimes it’s not clear who users love more – Honor Band 5 or Xiaomi Mi Band 4.

Honor MagicWatch 2, frankly, is more of such a pumped-up fitness tracker of the 80th level than the smart watch as we imagine it. Honor MagicWatch 2 is such a Honor Band 5 with a large screen and beautiful design. There is no separate app store, so the watch can only do what Honor decided to teach them. But more on that later.

What catches the eye of a smartwatch user after design? Of course, the display. And the display of Honor MagicWatch 2 is excellent. It is based on the AMOLED matrix, which is why the black color on it looks really black. The display is round, its resolution is 454 × 454 pixels. Of course, the rectangular display is more practical, because it displays more information, but in Honor they went along the path of aesthetics and made it round.

The maximum brightness of the display allows you to see everything in daylight on the street. Moscow has not seen sun rays for a very long time, so there is no way to test how the display will behave in the sun.

Gesture display control. To go back to the screen, you need to swipe your finger from the left edge to the center, and notifications from social networks also look like. There are also two physical buttons. The top button is marked with a red border, it acts as a power button, as well as the Home button, which returns to the home screen. The lower button is programmed by the manufacturer for “Training”, when it is pressed, a section with various sports activities opens. But if you wish, you can reprogram the button in the settings, for example, I set it to open “Messages” when it is pressed.

As mentioned earlier, Honor MagicWatch 2 is a pumped fitness tracker. There is a training section, heart rate tracking, activity counting, sleep tracking, and even stress tracking. It is clear that the clock will not be able to show the psychologically accurate level of stress. However, when you enable this function in the Huawei Health app, the user is asked several questions that will create a psychological picture of the user for the watch. Further, stress is tracked by heart rate.

You can also receive calls using the watch, but only selected contacts can call directly from the watch. At the same time, you can talk through the clock itself, it will come in handy, for example, if you are busy cooking, but there is no time to answer the call from the phone. Also, from the device you can not only control the music on the phone, but also listen to it from the watch itself, for this they have 4 GB of permanent memory, into which you can upload 500 tracks.

The watch has an alarm clock, but it must be set separately, they do not respond to the alarm clock that is installed on the phone. Of course, Honor MagicWatch 2 receive notifications from the phone, and on the big screen of the watch they are very convenient to view.

During testing, I ran into the problem that the Huawei Health application constantly falls off and becomes inactive on the phone, so the synchronization with the clock stops, and notifications stop coming. Perhaps this is due to the aggressive behavior of MIUI on my Redmi Note 7, which constantly tries to unload all applications from memory. To solve this problem, Huawei Health had to be blocked in the task manager of the phone so that it always remained active, and the operating system could not close it.

Definitely, when creating Honor MagicWatch 2, the company focused on athletes and those who lead a healthy lifestyle. Watches distinguish between several types of running, walking, swimming, fitness equipment and so on. There is even a section with breathing exercises!

On their own, at the start of a workout, the watch won’t start this or that section, the user will have to start the type of workout that he will do now. In this case, the watch will notify the user if the pulse rises above the permissible values.

Also, if the user is without movements for more than 60 minutes and is not sleeping at the same time, the watch will notify him that it is time to move. A useful feature, even I sometimes got up and did a little workout.

In addition, the watch very accurately tracks sleep and its phases, as well as gives tips on how to improve it.

The manufacturer claims that Honor MagicWatch 2 is able to work up to 14 days on a single charge. And I readily believe in this. They have incredible autonomy. For 5 days of hard testing, when I was constantly monitoring heart rate and stress, as well as constantly interacting with the watch when I received notifications and the frequent inclusion of running training, the watch was exhausted by only 30%. Therefore, they will work out for at least two weeks in this mode.

Watches will definitely become a good companion for athletes. The Honor brand itself is designed for young people, therefore, its devices too. For me, the functionality of Honor MagicWatch 2 is enough. Accepting calls and ringing from the watch is for me the best feature in them. But I’m not such an active user of wearable electronics, so all I need to do is monitor my heart rate, count steps and workouts, and track my sleep. I also really liked the stress tracking function – I think it is useful in our modern world.

I also like that the watch looks like a very stylish accessory that fits any style of clothing.

In Russia, watches are priced at $590. The price is not small, but Honor MagicWatch 2 is worth it.