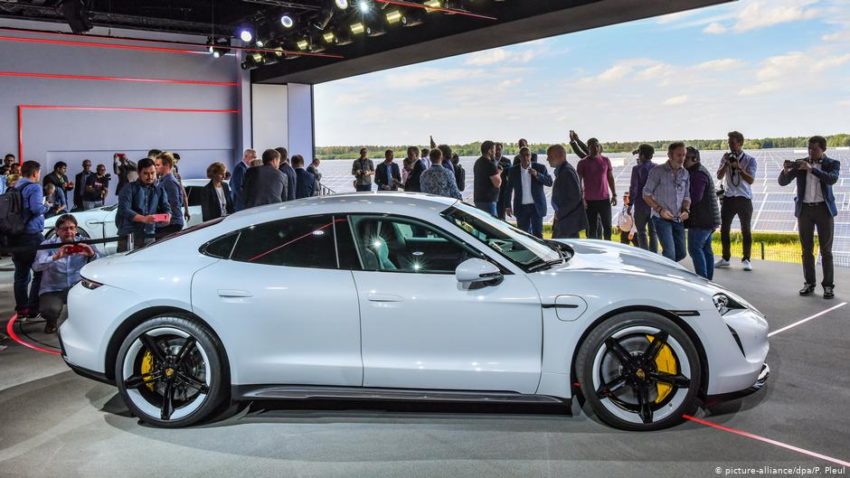 German car maker Porsche has built an environmentally friendly “factory of the future”, has provided more than a year of orders in a pig in a bag and challenges Tesla in the higher price segment.

The German company Porsche became famous for expensive sports cars, which it has been developing and producing since 1931, as well as prestigious SUVs. For a long time, many believed that someone, and this automaker would certainly not give up powerful internal combustion engines in favor of electric motors.

They were mistaken. On September 9, 2019, serial production of the first ever fully electric model in the history of the company: Porsche Taycan, began in the new workshops specially built on the territory of the parent plant in Stuttgart. DW talks about four key features of this project.

Taycan is the first Porsche to operate exclusively on electric traction. But the company began installing hybrid engines combining an internal combustion engine and an electric motor in its models back in 2011, when it launched mass production of the Panamera S Hybrid.

In 2014, the Cayenne S E-Hybrid SUV premiered. It was already a plug-in hybrid or a rechargeable hybrid, it generates electricity not only in the direction of travel (braking), but is also equipped with a large lithium-ion battery, to recharge which the car is connected to the electric network. Now the next technological step has been taken: the production of an all-electric model has begun.

New model for a new segment in the premium class

The Taycan is an entirely new production model, not just an electric motor. “We deliberately chose a segment in which our brand has not yet been represented,” says Oliver Blume, head of Porsche. This segment, according to a dpa observer, “is somewhere between the classic 911 and the four-door Panamera.”

Apparently, the company took such a path in order, on the one hand, to enter the electric car market with an original design, and on the other, in order not to create unnecessary competition for its tested models. As an example, the dpa browser cites Porsche’s current bestseller, the Macan Small SUV. It, by the way, will also be offered in a fully electric version – but only from 2022.

Why did Porsche even decide to produce electric cars? To counter the American Tesla Corporation in the premium segment? To improve its environmental image, damaged during the diesel scandal, in which it was pulled by the parent company Volkswagen and its daughter Audi? To increase your chances in the markets of China, where the state makes every effort to introduce electric vehicles, and in the USA, where they are especially popular among wealthy customers?

Apparently, all these factors played a role. True, Oliver Blume emphasizes: “We turned towards electromobility even before discussions about the future of the diesel engine and climate protection flared up.” Indeed, back in 2015, Porsche headquarters in Stuttgart proclaimed electric vehicles the new main line of development for the industry (Mission E). It was decided to invest 6 billion euros in accelerated progress along this path until 2022.

That is why in the same 2015, for the production of Taycan, they began to build several separate workshops on the territory of the company’s head plant in the Stuttgart district of Zuffenhausen. A fundamentally new production site is another feature of the project. Here it is important not only and not so much the specific economic aspect as the innovative environmental concept of the new enterprise.

The company’s management announced that it would like to build a production site for electric vehicles at its own factory and employ 1,500 people in addition, but this will be more expensive than building a new factory somewhere in another part of Germany or even outside of it, where costs will be lower, and there will be more space than in Stuttgart in the middle of the city. In response, the labor collective agreed until 2025 to partially abandon the salary increases stipulated by the tariff agreement. However, it may be possible to compensate for the losses with premiums, which are especially generous at Porsche.

In addition, the Porsche leadership put forward the slogan: an environmentally friendly electric car should go off the assembly line at an environmentally friendly enterprise. Therefore, Taycan will be produced in workshops that use electricity from renewable sources and are heated by biogas. They are built taking into account the latest energy efficiency requirements, goods between them are transported by electric vehicles, roofs are planted with greenery. All these are concrete steps towards the creation of a “factory of the future” that does not emit CO2 greenhouse gas harmful to the global climate and does not harm the environment at all: Zero Impact Factory.

Confidence in the brand: 30 thousand orders for a “pig in a poke” for 150 thousand euros

Taycan will go on sale at the end of this year – first in the USA, then in Europe and China. Porsche is going to produce at least 20 thousand electric cars a year, new production facilities make it possible to almost double this number. On September 9, at the start of production ceremony, the head of the company, Oliver Blume, announced that more than 30,000 pre-orders had already been received. This is another feature of the project.

After all, customers, depositing 2500 euros each, ordered, in fact, a “pig in a poke.” The German company had never produced electric vehicles before, few people saw the new model at all, there were no test drives. Nevertheless, the credibility of the Porsche brand is so great that wealthy people actually blindly place orders for a car that costs in Germany (including VAT) over 152 thousand euros for the Taycan Turbo model and 185 thousand euros for the Taycan Turbo S.

But the buyer receives, according to the Porsche website, an electric car with a capacity of 680 and 760 horsepower, respectively, accelerating to 100 kilometers per hour in 3.2 and 2.8 seconds, having a range in the combined cycle (suburban city) of 450 kilometers and 370 kilometers in the suburban cycle. Charging the battery with alternating current (from a normal household outlet) takes from 9 to 10.5 hours. When using direct current from a fast charging station, the process lasts from 93 minutes to 22.5 minutes, if the installation is especially powerful. In this case, you can stock up on energy for the next 100 kilometers in 5 minutes, says Porsche.