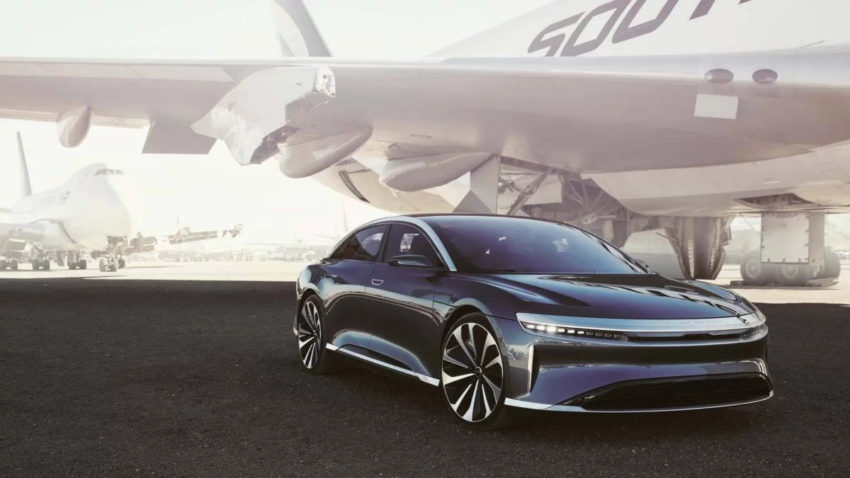 The manufacturers of the Lucid Air sedan have been looking for financing for a long time, and now, finally, they are ready to fight back to Ilon Mask. Lucid had several years to finalize the luxury sedan. So the battery efficiency and the distance on one charge will be “unsurpassed”, the head of the company promises.

Electrek has interviewed Peter Rawlinson, CEO and technical director of Lucid, a startup that has been planning to kill Tesla for years. Back in 2017, the Lucid Air sedan was introduced at a price of $60 thousand. Before the release of Model 3, this was a serious budget application – but for a long time there was no money to organize production. And the affordable electric sedan from the company Ilona Mask has long been on the road.

At the end of 2018, Lucid received about $1 billion from Saudi Arabia to organize production, and at the end of January began accepting pre-orders.
Rawlison says that all the while waiting for funding, the model was finalized, and promises an “unsurpassed level of efficiency” and a trip range on a single charge – more than 640 kilometers.

Rawlison says the company’s plant in California is about to install a roof, after which installation of production lines will begin. In the meantime, Lucid is busy manufacturing a pilot batch of 80 cars, most of which will be used in various tests.

What the head of the company promises

One of the most important innovations of the Air 2020 model year is a powerful charging system. Tesla transmits 400 kW, Porsche Taycan – 800 kW. At Lucid Air, the charging power is 900 kW. And thanks to this, you can install powerful batteries, which is enough for 640 kilometers.

Rawlinson also claims that Air will be a leader in efficiency: the car will travel 4-5 kilometers at 1 kW/h of battery capacity.

Tesla does not have “secret knowledge” in this area, he assures, and the technology can be taken to a new level. For example, due to the high efficiency of the top version of Air, you no longer need the 130 kWh monster battery, which was announced in 2017

The engine, says the director, also came out outstanding: it delivers the promised 1,000 horsepower, and at the same time it is so compact that one person can lift it with his bare hands. Rawlinson does not rule out that Lucid will sell engines separately – as a supplier.

True, along with all the innovations, the price of the electric sedan has grown considerably. Lucid has abandoned cheap options and now hopes to sell its electric cars at a price of 100 thousand dollars and more. And the competitor for himself sees not so much Tesla as the Mercedes-Benz S-Class.

When will the car be presented?

The production version of Lucid Air is expected to be unveiled at the April New York Auto Show.

Recently, Elon Musk said that the Model S after the next update will also become an electric car that overcomes 640 kilometers on a single charge. Moreover, Musk noted that the characteristics of the machine on the site are somewhat underestimated, and its real capabilities are much greater.

In addition, the “Battery Day” promised by Mask will be held very soon, at which Tesla will present new developments in this area. It is possible that after this day the statements of the head of startup Lucid will not be as self-confident.

Although Rawlinson claims that Tesla does not have “secret knowledge” in the field of batteries, the company, nevertheless, has great experience and is significantly superior to the experience of Lucid. The fact is that the Tesla strategy is much worked out. The company never made self-confident statements, but always proved its promises by explaining the real possibility of their implementation.

This perfectly illustrates the situation with Tesla stocks. The company is experiencing a great leap forward and is growing steadily. Gigafactory in China has already shipped the first orders and is confidently working further. The company plans to build a plant in Berlin, which will satisfy the needs of European customers. All these steps lead to cheaper Tesla cars and their greater availability.

Today, Tesla feels very comfortable in the electric car market and in the near future it is unlikely that anyone will be able to throw the industry leader off the podium. Lucid can certainly try to do this, but the success of such an adventure is doubtful.