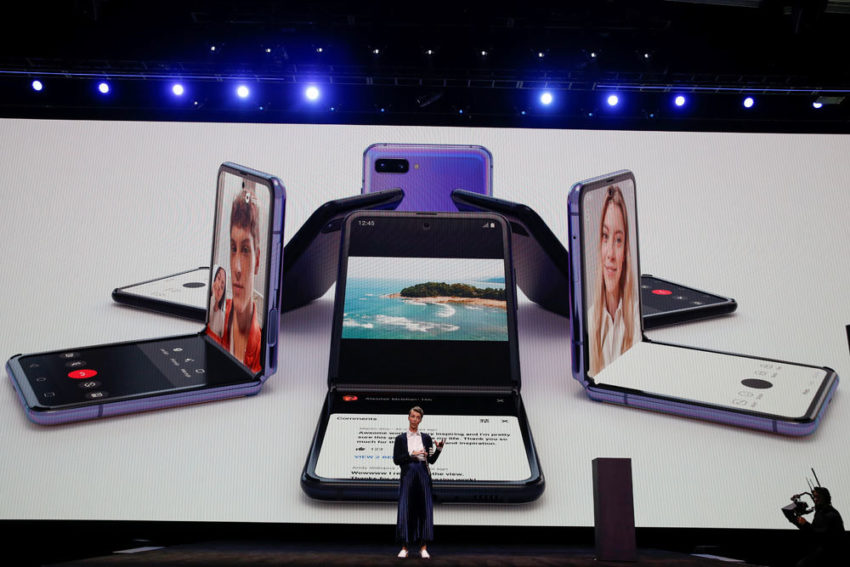 The world has become one more folding smartphone – Samsung has introduced a new “clamshell” called Galaxy Z Flip. When folded, the device resembles a small pocket mirror or powder box, but it is worth revealing it as a 6.7-inch screen appears.

About Samsung’s love for folding devices can be said from last year, when the company introduced a folding like a book Galaxy Fold. The first version of the smartphone was not very successful – for example, flexible glass was not very durable. But then the engineers took into account all the mistakes and made the design more reliable.

The body of the new Galaxy Z Flip can be fixed in several positions – folded, unfolded and in the form of the letter “g”. In the latter case, the smartphone can be conveniently put on the table, using the bottom as a stand, and communicate via video. 256 gigabytes of memory are built into the smartphone – this is enough for a long time to store photos, videos and applications.

The device turned out to be very unusual, and I want to believe that “childhood diseases” have already been eliminated. If we talk about the price, then it can scare away many people – Galaxy Z Flip costs approximately $1900.

Galazy Z Flip is Samsung’s turn towards life style in comparison with the “geek” Galaxy Fold, says Dmitry Ryabinin, head of Hi-Tech Mail.ru. According to him, the model does not prioritize the characteristics, but enters a new audience of fans of unusual fashion accessories. The price of new items is significantly lower than that of Fold, but is still too high, which will limit the popularity of the model.

The analyst is convinced folding smartphones are a “topic of the decade” in technology, but not yet a mass product. Nevertheless, Samsung has a chance to make the Z Flip a bestseller, actively promoting it in the maximum number of markets and attracting stars to advertising. The main “victim” of this advancement will be the flexible Motorola Razr – the device is worse presented and costs more.

Together with the “clamshell” Samsung also showed three new flagship smartphones of the Galaxy S20 line. It includes the S20 (6.2-inch screen), S20+ (6.7-inch screen) and S20 Ultra (6.9-inch screen) models. All of them have a display refresh rate of 120 Hz – this means that any animation on them looks much smoother than on older models.

The main emphasis is on the quality of mobile photography. One of the tricks is the smart hybrid zoom. Galaxy S20 and S20+ models allow you to zoom in 30 times, and S20 Ultra – 100 times. In addition, cameras are able to produce clear, high-quality images in low light conditions and are equipped with a stabilization system that helps to shoot smooth video even on the go.

“The Galaxy S20 line is coming out in an unprecedented circulation and at a very good time, when not only Chinese brands, but also Apple are weakened due to delays in deliveries. The models are the most technological on the market and will be trendsetters for competitors, especially with regard to the screen and camera. The rest of the filling is also at the level, ”says Dmitry Ryabinin.“ Together, this makes the new Samsung smartphones currently the only alternative for those who are looking for the most advanced device with the maximum margin of safety, so as not to change it in a year or two and more. With high probability Galaxy S20 will become the most popular line of updating at least the last three years, and if the crisis drags on in China, then and for all time. “

Cheap Samsung Galaxy A series smartphones compete with brands from China, and the new Galaxy S20 will try to “pull” Apple’s stake, the expert said.