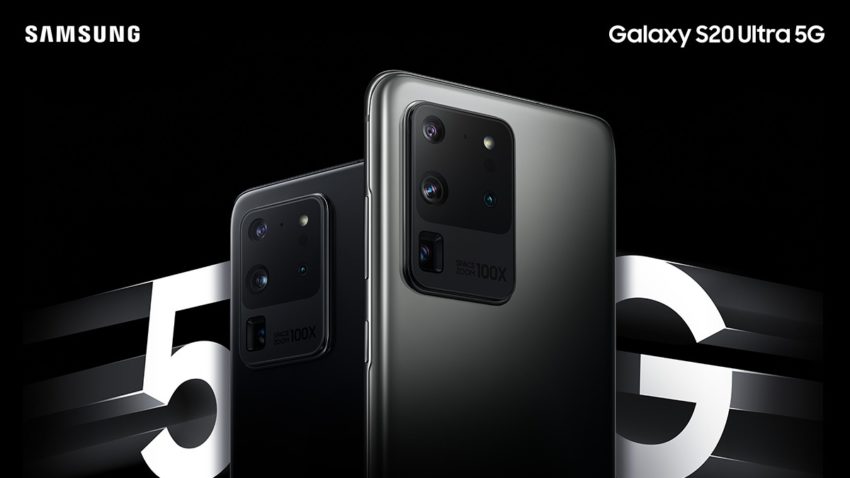 Samsung has put an end to the sheer number of leaks that the Internet has filled in recent months. At the ongoing Galaxy Unpacked 2020 presentation in San Francisco, the South Korean giant unveiled the long-awaited flagship Galaxy S20 series smartphones. As expected, it included three models: the base Galaxy S20, the larger Galaxy S20+ and the top-end Galaxy S20 Ultra. The manufacturer first of all highlights a fundamentally new camera system with support for 8K video recording, enhanced by AI technologies and Samsung’s largest optical sensor today, 5G support with dual-mode support for fifth-generation networks (NSA and SA), a high-performance processor, huge memory capacities and ample entertainment options.

The design of the smartphones is exactly the same as we saw it on a lot of images, photos and videos that hit the network in recent months – all models received large, curved Quad HD + Dynamic AMOLED 2X displays with a center-mounted front camera and a rectangular block protruding slightly above the surface of the case the main camera on the back (the design is different especially for the Galaxy S20 Ultra).

It is based on the eight-core flagship SoC Exynos 990 for all regions except the USA and China, where smartphones will come out with the Snapdragon 865. Out of the box, everyone works under Android 10 with the new One UI 2.0 shell. The base Galaxy S20 model is equipped with 8 or 12 GB of high-speed LPDDR5 RAM and 128 UFS 3 flash memory, the larger Galaxy S20+ is offered in versions 8/128 GB and 12/512 GB, and the top Galaxy S20 Ultra is equipped with 12 or 16 GB of RAM and 512 GB flash memory. Plus, microSD cards up to 1 TB are supported.

All models use curved Infinity-O Dynamic AMOLED displays with “embedded” front cameras and built-in ultrasonic fingerprint scanners (it remains to be seen exactly which ones are the old 3D Sonic Sensor or the new 3D Sonic Max). The aspect ratio was 20: 9, the resolution was 1440p+ (3200×1440 pixels). Common to all are support for HDR10+, screen refresh rates of 120 Hz (120 Hz mode is only in Full HD resolution, while in the native WQHD – 60 Hz) and sensor read frequencies of 240 Hz.

The Galaxy S20 and Galaxy S20+ models have a front camera embedded in the screen with a resolution of 10 megapixels (a lens with an aperture of F/2.2 and an angle of view of 80˚), and the Galaxy S20 Ultra has a sensor with as much as 40 megapixels (the optics are the same).

Regarding the main cameras, there are differences and they are very significant. Details of the configuration of the main camera of each model in the table below:

The Galaxy S20 and S20+ provide 30x hybrid zoom, while the Galaxy S20 Ultra provides 100x. At the same time, artificial intelligence algorithms will make it possible to repeatedly approximate one or another object without significant loss of quality.

In addition, the Galaxy S20 Ultra and its advanced sensor support Nonacell technology. This marketing designation hides the evolutionary development of Tetracell technology, already familiar to us from previous Samsung photo sensors, (the response of the Korean giant to rival Sony Quad Bayer), which provides the ability to combine neighboring pixels in groups of four to reduce noise, increase photosensitivity and dynamic range. Nonacell will allow you to combine together up to 9 pixels while reducing the resolution of the final image from 108 to 12 megapixels. As a result, it will be possible to get better pictures in low light. At the presentation of this feature, special attention was paid.

All smartphones support 8K video recording at 30 fps. 2160p@30/60fps and 1080p@30/60/240fps shooting modes are also supported. There are electronic and optical stabilization when recording video. Also, the smartphone can shoot on all cameras at the same time, after which the user will be prompted to select the frames they like.

As for the power subsystem, there are also differences. The battery capacity is 4000mAh, 4500mAh and 5000mAh for the Galaxy S20, Galaxy S20+ and Galaxy S20 Ultra, respectively. Fast wired power of 25W or 45W is supported (Galaxy S20 Ultra only, but only 25-watt charging included) and Fast Wireless Charging 2.0 with 10W power. The PowerShare wireless reverse charging function allows you to charge other Qi-certified devices, such as smartphones and headphones.

Among the common features of the models are protection of the case from dust and water in accordance with the degree of IP68 (it can withstand immersion to a depth of 1.5m for half an hour), NFC support, GPS, Bluetooth 5.0, dual-band Wi-Fi 802.11 a/b/g/n/ac/ax, USB 3.2 Gen 1 Type-C, stereo speakers and support for 32-bit audio with a sampling frequency of up to 384kHz.

By the way, in the Galaxy S20, the manufacturer refused not only the Bixby assistant activation key, but also the 3.5mm audio jack for headphones, which, unlike the first, many will miss. Thus, the Galaxy S20 is the first flagship of the Galaxy S series without a 3.5mm jack.

Price and start of sales

Pre-ordered from February 11 (to March 11), users will receive new fully wireless Galaxy Buds+ headphones as a gift. In addition, they will be able to get the new product a week earlier – orders will be issued from March 6 – and take advantage of the offer, which gives the right to issue an interest-free loan for 25 months. Smartphones will appear in free retail sales from March 12 at the following prices: