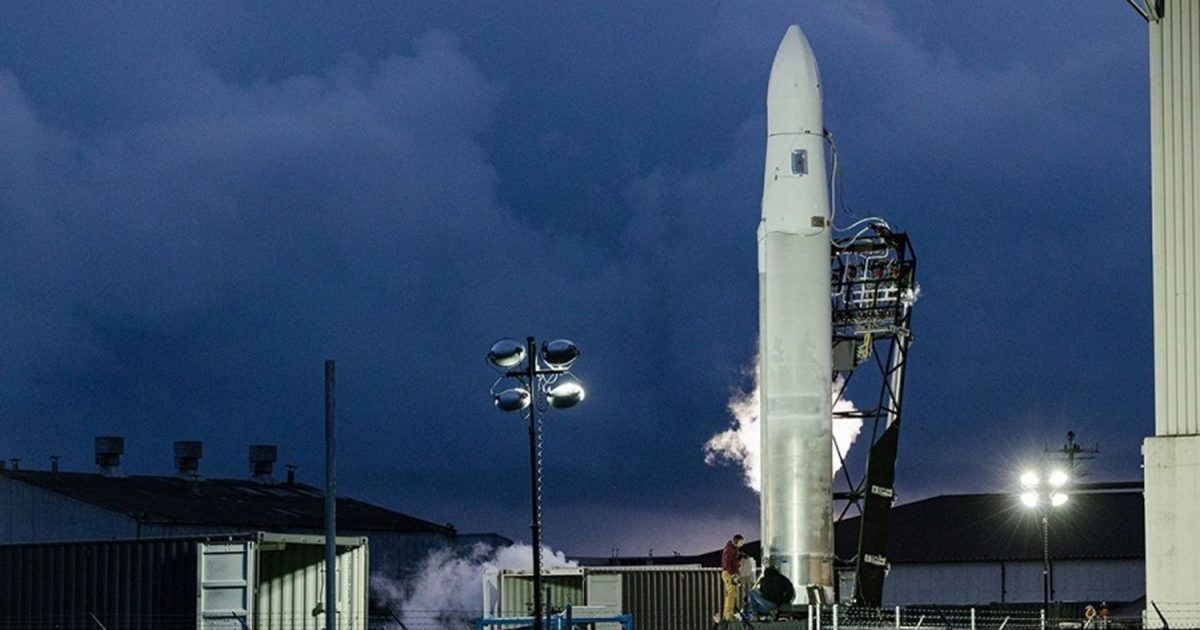 Publications Bloomberg and Ars Technica talked about the new Astra space startup, which officially launched on February 3, 2020, and before that was in “hidden” mode for three years. The founders of the company say they want to become FedEx in space: Astra will produce small and cheap rockets and send satellites to a low Earth rocket. At the same time, the launch cost will be $1 million, and rockets can be sent daily.

Astra co-founder and technology director Adam London says the goal of the startup is to develop and ship into space not the most modern and largest rockets, but the cheapest and most technologically advanced ones. In 2016, together with Astra co-founder Chris Kemp, they developed two main ways of developing the space industry for low-cost rocket launches into low Earth orbit. One of them – the development of high-reliability rockets with the possibility of reusable stages – was successfully taken by SpaceX with Falcon 9. “For large and expensive satellites, as well as sending to the Falcon 9’s monoauto is the best solution, “says London. But Astra believes there is a second way. Over the past decade, many new space startups, large companies, as well as the military, have begun to develop small satellites for sending into orbit. According to London, these are satellites weighing 50-150 kg, the design life of which is only a few years, after which they burn up in the Earth’s atmosphere. Therefore, for mass sending satellites into orbit, it is important for companies to find a reliable enough and at the same time cheap way. Astra has developed what London considers a solution to the problem – an imperfect, but very cheap in the manufacture of rocket, which will allow you to exchange a small percentage of reliability for a big saving of money for customers who are ready on such conditions. Rocket 3.0 During 2017, the team developed the first version of the Rocket 1.0 launch vehicle and modified the test site of the former naval station in California.

They conducted the tests inside the station, secretly from competitors – using two large tunnels designed to test jet engines: they absorbed fire and hot air, and thick concrete walls protected from explosions during failed tests.Thus, Astra was able to conduct thousands of prototype missile tests without revealing of their activities: a startup could test and improve rockets at the assembly site, and not take them to this open area, like other space companies.

By the spring of 2018, the company was ready to launch the first rocket with five engines of the first stage and a metal plug for the second. Not yet in orbit: the first-stage engines only worked for about 60 seconds, and according to Kemp, the main task of Rocket 1.0 was not to harm anyone or destroy the launch site. The tests were successful. Rocket 2.0 was launched in November 2018: it still did not have second-stage engines to put the payload into orbit, but Astra planned that it had enough power to fly to the “Pocket Line” at an altitude of about 100 km above sea ​​level. The flight was shorter than expected, and the rocket fulfilled only 75% of the goals. All 2019, the Astra team of 170 people spent on the development and assembly of Rocket 3.0, which Kemp and London want to put into orbit in 2020.

With its help Astra can win the Pentagon Darpa Launch Challenge competition. For this, a startup needs to send two rockets with different payloads from different places within a few weeks. The winner will receive $ 12 million. Astra is the only remaining finalist: Virgin Orbit Richard Branson refused to participate in order not to be distracted from commercial goals, and the third finalist Vector Launch filed for bankruptcy in December 2019.If Astra succeeds in successfully launching Rocket 3.0 into orbit before October 2020, the startup will set a new record for the speed of rocket development and launch, Ars Technica notes. SpaceX is now considered the record holder: 6 years and 4 months have passed from the company’s foundation to going into orbit using Falcon 1.

The cheaper, the better. Almost all decisions are made by Astra in such a way as to offer customers the lowest price for putting 1kg of payload into orbit. Now the leader in the production of small rockets Rocket Lab offers customers to bring from 150 to 225kg of payload in low Earth orbit $7.5 million. Astra offers shipping from 75kg to 205kg for $2.5 million, but Kemp plans to gradually reduce the cost to $1 million. This price will allow Astra to stand at the cost of flying at the same level with Falcon 9. The company independently produces rockets, so how to order the item whether aerospace suppliers are too expensive. For example, a piece of machined aluminum the size of an Apple Watch costs Astra $5, while suppliers will cost “hundreds of dollars,” says Kemp. Astra’s founders do not believe that 3D printing of rocket parts, for example, as Relativity Space does will be successful – in their opinion, this is the most expensive and slowest method of production. Astra chooses the cheapest materials. In Rocket 1.0, the fairing was made of carbon fiber, but due to the inability to automate the manufacturing process, expensive tools and materials, its cost exceeded $250 thousand. Therefore, in Rocket 3.0, fairings were made of aluminum – they became 20% heavier, but the production cost was reduced up to $2500.

Another way to save money is to increase production scale: if the production of one valve costs $3000, then the production of 100 valves will reduce costs to $300 per product. Thus, the company’s goal of $1 million per launch depends on achieving the scale of the launches – there should be at least 100 per year. “The idea that really sets this company apart and excites our customers, investors and employees is that we will be on a daily basis produce and launch missiles, “says Kemp. This is Astra’s ultimate goal. An iterative way to develop rockets The co-founders admit that they want to reduce the cost of production and launch of rockets as opposed to space companies that spend money senselessly on the effectiveness of launch: for example, they invite famous personalities or build ice sculptures with the company logo. For this, they decided gradually scale production and launch at least a hundred rockets a year in order to reduce the cost of launch. But for this you can’t just increase the number of launch vehicles – you need to gradually chshat development process, learn and efficiently use resources. Therefore, Astra is based on an iterative development method, not a linear one.

Most rockets are designed linearly: engineers spend years pre-finalizing a project before technicians begin rocket production. A linear process is more expensive, takes longer, but cannot help find structural flaws until the rocket is complete and launched. However, the advantage of this method is reliability: the rockets pass a smoother test process and explode less. The iterative process is more “dirty”: employees and investors must get used to constant failures, look for solutions to problems in them and quickly introduce innovations. One of the first iterative space startups production became SpaceX. One of his three co-founders, Chris Thompson, is currently leading Astra. In Astra, each new version of the rocket is optimized both in terms of technology and power. For example, in Rocket 3.0, rivets in the payload fairing were installed by an engineer, and in Rocket 4.0 the company hopes to optimize the process to save time and money.

According to Kemp, one of the reasons why Astra remained in “hidden” mode for so long was that the company did not want to explain why the rocket design is constantly changing, and talk about its activities until it is ready to launch an orbital rocket. He believes that the company Doesn’t need advertising to search for clients and raise funds – even in the “hidden” mode, Astra raised more than $100 million from Acme, Advance, Airbus Ventures, Canaan Partners, Innovation Endeavors, Salesforce co-founder Mark Benioff and other investors. Astra, ready to fail, produces five rockets Rocket 3.0 first When they referred to as “the first of three”, “the second of the three” and “third of three.” The plan is to launch the first and see what happens. If there are problems that, according to London and Kemp, should arise, the engineers will identify the problems and fix them in the second rocket. They believe that in 2020 it will take three attempts to enter orbit – the “fourth of three” and the fifth missile will remain as a spare.

By the end of 2020, Astra will begin work on Rocket 4.0 and plans to launch 25 rockets to begin commercial launches. After that, Rocket 5.0 will be released – 100 missiles with a lower cost and high power are planned in this production cycle. According to Kemp, the existing plant can produce about two rockets a month, but there is still room for growth. With the help of Rocket 3.0 and Rocket 4.0, the company plans to improve rocket reliability – London believes that 95% of successful launches will be a good indicator. This is lower than that of Atlas V or Falcon 9, but more economically advantageous: if the customer wants to send 20 more or less similar satellites, the additional costs will be only 5% more. The experimental launch of the Astra rocket is scheduled for February 21, 2020. To win $12 million in the Darpa contest, a startup must put the satellite into a given orbit. Then Astra will have several weeks to place the second rocket on another launch pad and launch it. If successful, this will be an “incredibly fast” result for an industry in which 6-12 months is the typical period of time needed to calibrate launch on a new site and with a new payload, notes Bloomberg.