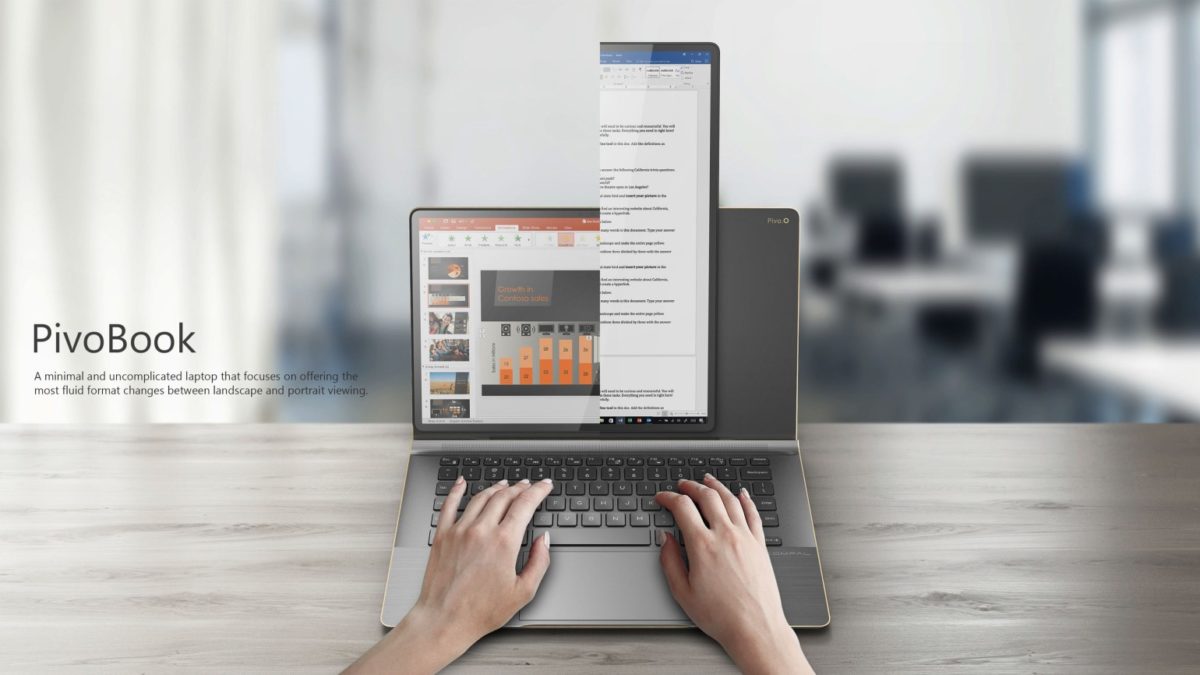 The Taiwanese company Compal Electronics introduced a laptop whose screen can be turned into portrait mode without disconnecting from the case. Briefly about the device tells the Hexus portal.

Note that the widespread use of smartphones has led many social networks in recent years to support and promote formats sharpened by the vertical orientation of the screen, and today this trend has become so significant that electronics manufacturers have begun to pay attention to it: for example, Samsung has recently unveiled The Sero Concept Swivel TV, which in portrait mode can fully duplicate the screen of a mobile phone.

However, in addition to entertaining content, a vertical screen can be useful for other purposes too, for example, when working with text in a traditional “book” presentation. In addition, vertical orientation may be more preferable for video calls.

When working with vertical content on a desktop computer, users usually have no restrictions: many modern monitors can be rotated 90 degrees at any time, while most modern operating systems support screen rotation (in Windows, for example, Ctrl + Alt + arrow). However, in the niche of mobile electronics, apart from smartphones, the choice is not so great. As a rule, this is either a tablet or a transformer laptop that can turn into a kind of tablet – however, both of these options are almost always implemented so that a user who decides to install his gadget vertically needs a separate keyboard for full work.

Compal Electronics, known primarily as a contract manufacturer of electronics, collaborating with IT giants such as Apple, Dell and HP, recently presented its solution to the problem. A Taiwanese company developed the PivoBook concept laptop, the screen of which can be rotated without affecting the bottom of the device. Allegedly, the 14-inch “thin and light” touch-sensitive OLED display of the device is mounted on a lid on a special hinge, and if necessary, the user can lift it by the lower right corner and set it to a vertical position – while the screen does not detach from the case in the process and does not turn off. It is emphasized separately that the user can even rotate the display with one hand, since the rotary mechanism does not require special efforts.

The developers plan to implement PivoBook as a serial device, but not under the brand name Compal Electronics. It is expected that the commercial version of the unusual laptop (which, incidentally, received the prestigious iF product design award) will go on sale under the brand name of a third-party company in 2020.

Apparently, due to the fact that the PivoBook is currently only a conceptual device, almost nothing is reported about its technical characteristics – after all, when creating the serial version they will probably change; it is only indicated that in its current form the laptop weighs 1.5 kilograms and is equipped with an increased touchpad. It is also unknown how much the serial device will cost.

Finally, we note that this year’s PivoBook was not the only Compal Electronics concept to win the iF product design award. Besides him, the award also went to the FullVision concept, which consists of two separate devices – a laptop with a screen diagonal of 15.6 inches (aspect ratio – 16: 9) and a tablet. At the same time, the design of both devices allows the owner, if necessary, to shift the built-in laptop screen to the left and insert the tablet into the released right side. As a result, the user gets a laptop with a 29-inch display and a 32: 9 aspect ratio.

As with PivoBook, the technology underlying FullVision will be commercialized in a third-party brand device by the end of the year.