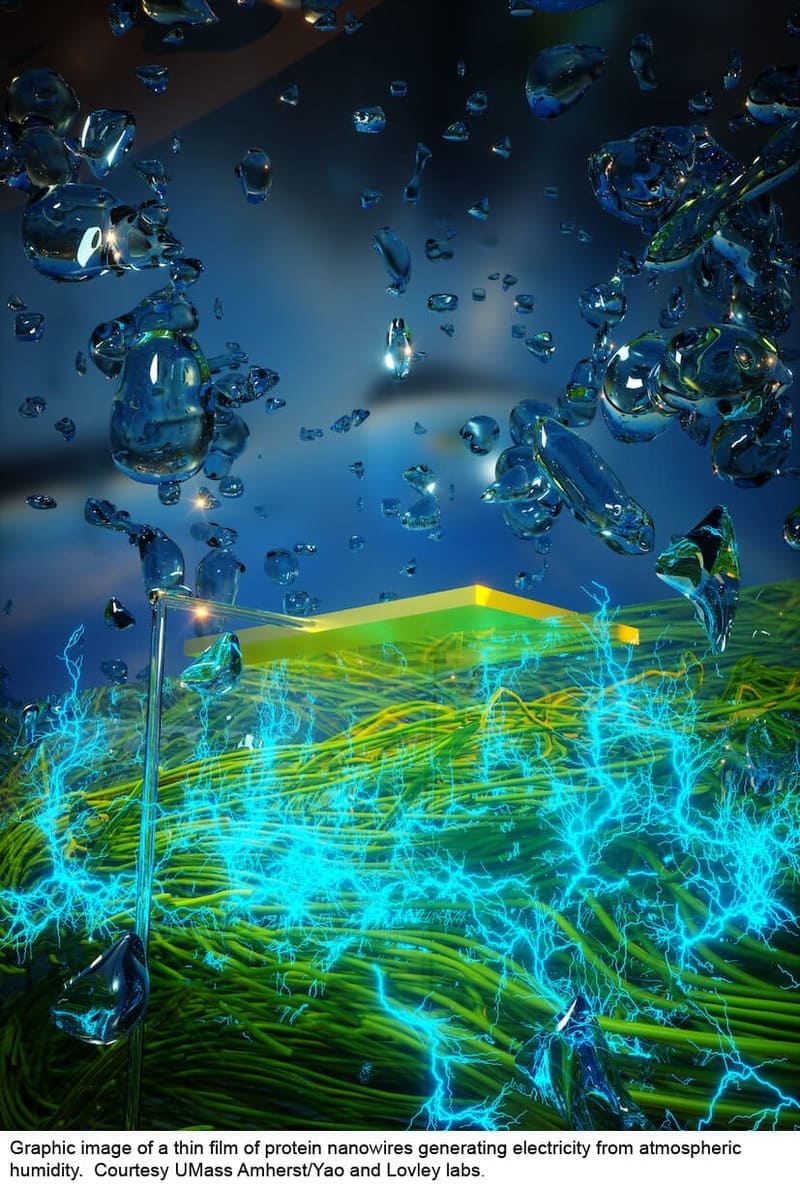 Scientists from the University of Massachusetts Amherst have developed a device that uses natural protein to extract electrical energy from the smallest water droplets in the atmosphere. New technology can be applied in the future for renewable energy, climate change and medicine.

The publication of the new discovery appeared in Nature on February 17, 2020. Electors – energy engineer Jan Yao and microbiologist Derek Lovley created a device called the Airgen or an electrically conductive air power generator. protein nanowire made using microorganisms. In Aerogen, electrodes are connected to a conductor in such a way that an electric current is generated from water vapor, which is constantly present in the atmosphere.

“We literally make electricity from the air,” says Yao. “Aerogen produces clean energy around the clock and seven days a week.” Lovley, who has been promoting biotechnological electrical materials for nearly thirty years, claims that this is the most amazing and amazing use of protein nanowires of all that have existed so far.

The new technology developed in the Yao laboratory does not produce pollution, uses a renewable resource and is cheap. It can produce energy even in places with extremely low humidity, for example, in the Sahara desert. It has significant advantages over other types of renewable energy, such as solar and wind energy. The new device does not require any sun or wind and can even work indoors.

The device requires only a thin film – a protein nanowire, less than 10 microns thick, the researchers explain. The lower part of the film is fixed to the electrode, while the smaller electrode, covering only part of the film, is located on top. The film absorbs water vapor from the atmosphere. The combination of conductivity and surface chemical activity of a protein nanowire, as well as properly arranged pores inside the film, provide conditions in which an electric current arises between the electrodes.

Researchers said that the current from “Aerogen” can now power small electronic devices, and they hope that the invention will pay off in the near future. At the next stage, scientists plan to create small “patches” that can fuel medical sensors or “smart” watches, and it will be possible to do without traditional batteries. They also hope to create phones that will not need periodic recharging.

The ultimate goal is to create a wide range of applications. For example, a system can be mounted in a mural, and energize your home. Or we can build a freestanding air generator that will store energy. Perhaps we can create an installation suitable for industrial use.

Continuing to promote biotechnology, the Loveli laboratory has created a new bacterial filter that will help produce protein nanowires faster and cheaper.

With this new technology, protein nanowires will no longer be a bottleneck when creating such devices.

The invention of an air generator is an example of unusually close interdisciplinary communication. The necessary microbe Derek Lovli discovered in the silt of the Potomac River more than thirty years ago. Then, in his laboratory, the ability of this microbe to produce an electrically conductive protein suitable for creating nanowires was discovered. Before joining Amherst University, Yao worked for many years at Harvard, where he developed devices with silicon nanowires. They joined forces to test whether it would be possible to create useful devices using protein nanowires. Xiaomeng Liu, one of the students in the laboratory, while developing new sensors, suddenly discovered something unexpected. He recalls: “I noticed that when the electrode is connected to the conductor in a certain way, the device generates current. I noticed that the effect of atmospheric humidity is significant, and that the protein nanowire absorbs water, creating a potential difference.

In addition to Aerogen, Yao’s laboratory has created several more devices with protein nanowires. “This is just the beginning of a new era of protein electronics,” Yao said.