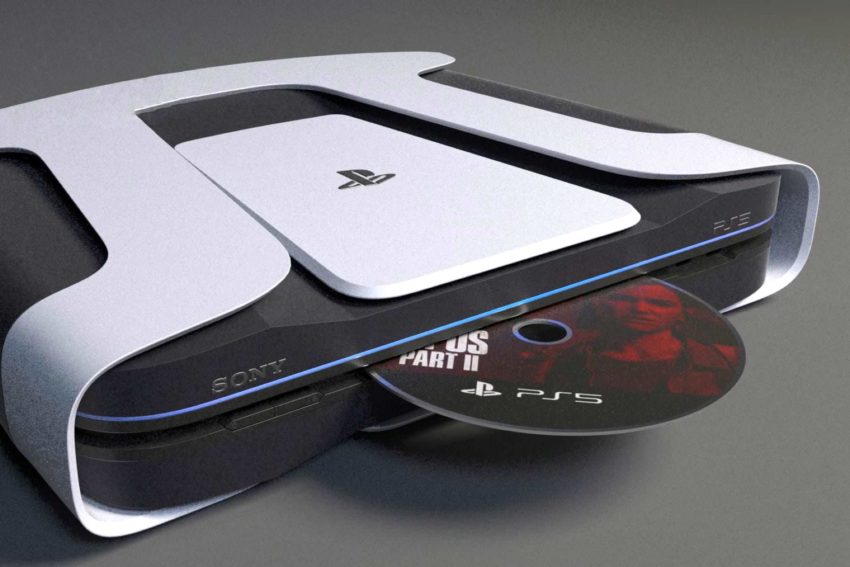 As you know, at the end of this 2020, the newest game console in the person of Sony PlayStation 5 will be released on the market, and a whole host of different features are attributed to it, with which it will definitely please absolutely everyone, since it will be able to run video games in 4K UHD resolution (3840×2160 pixels) at 60 frames per second. It goes without saying that this is far from the only “feature” of the next generation game console, equipped with the latest technology and technology. The other day, its manufacturing company, that is, Sony, unveiled the DualSense game controller, which became the new DualShock 5, which everyone was waiting for. The novelty has stunning design and ergonomics, so when using it, users will get maximum pleasure.

However, the manufacturer has not yet shown the new console in the face of the PS5. Against the background of such a state of affairs, the famous industrial designer Paul Robinson decided to recreate the appearance of the new game console based on the available information about what exactly the new game console in the person of Sony PlayStation 5 can please everyone with in terms of appearance. Taking the appearance of the DualSense controller as a basis, he recreated the design of the new console from scratch, which, in turn, made it possible to create a product that was simply stunning in terms of appearance. The brand new game console is made in a combination of black and white, which is complemented by blue backlighting.

The next generation game console is equipped with the latest generation Blu-ray optical drive, which can be used both for playing video games from physical media, that is, discs, and for watching any content if it is recorded on an optical storage medium. On the front of the console, there are several USB Type-C ports designed for both charging game controllers and connecting various auxiliary devices. At the same time, in the PS5 settings, it will be possible to independently choose and decide whether this console will support power on these ports in the off state, but when connected to the mains. This feature will allow you to use this console even to recharge smartphones and tablets.

It is not yet known exactly how the Sony PlayStation 5 will look when it hits the market, but its appearance is definitely guaranteed to be able to please everyone. Do not forget that this console will actually be something to pleasantly surprise all those who are waiting for its announcement and launch. The new game console will bring with it increased speed, photorealistic graphics, compatibility with a ray tracing system based on the RDNA 2 architecture, support for the latest generation of dynamic HDR lighting, the latest flash memory with speeds of over 3000 MB/s, and a number of other features. which will make it the best console on the market that any company has ever created. The price tag of the console will be at the level of $500 to pay for it.